The bridge will be part of the Green Cycle Route and the Harbor Route and will create better conditions for pedestrians and cyclists as well as bring the city and the harbor closer together.

The bridge is located where the original Langebro was located from the end of the 17th century until the beginning of the 20th century. The bridge creates a recreational, green and historical connection that stretches from Ørstedparken via Vester Voldgade to Christianshavn’s Voldanlæg and on to Holmen.

The load-bearing system is a stiffened plate deck supported by two triangular girders that twist in the longitudinal direction of the bridge. It is designed as a double swing bridge that is moment stiff in the middle.

The two swing sections are supported by a 3-row roller slewing ring with internal teeth. The moment-stiff connection in the middle is made with 4 pcs. 650 ton hydraulic cylinders. There are 4 pcs. yaw drive for each swing section of 15 kW each.

Our involvement as advisor

Pedestrian and bicycle bridge over the inner harbor in extension of Vester Voldgade just south of Langebro. 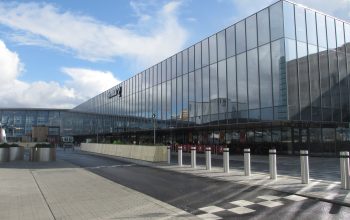 A central element in the “Expanding CPH” growth plan, which must ensure a capacity increase to 40 million passengers annually.

Since 2013 we have designed 10 road bridges, 10 fixed path bridges and 3 folding bridges for Copenhagen's South Harbour.

Over the years, we have received ECCS's Steel Design Award a total of 7 times for, among other things, the Øresund Bridge and the Sundsvall Bridge.

Since 1984, we have carried out more than 40 extensive projects for Copenhagen Airport.